The author will read from it at Chop Suey Books in Carytown on Saturday, Oct. 27, at 7 p.m. He will be in Charlottesville on Friday, Oct. 26, at New Dominion Bookstore with Jocelyn Johnson at 7 p.m. 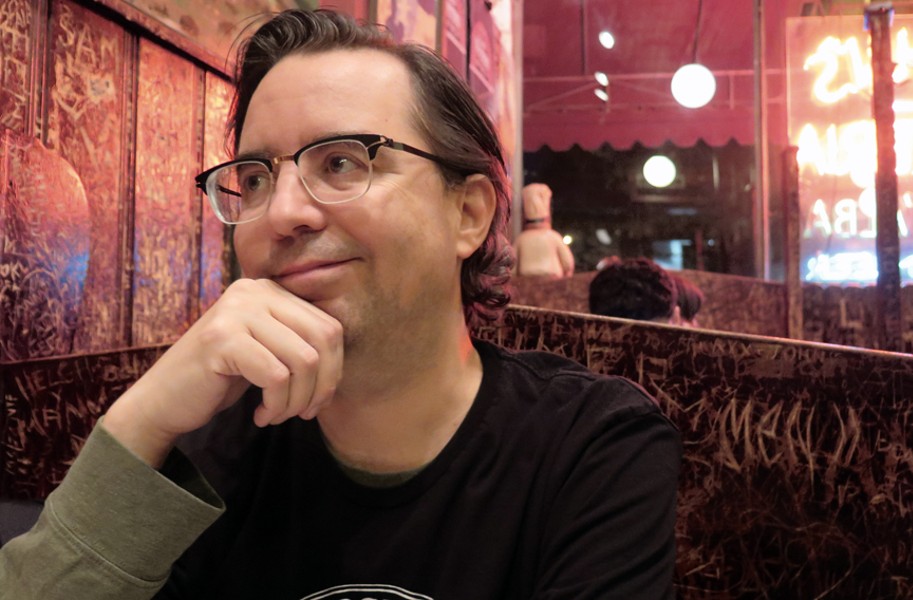 Author Kembrew McLeod, a Virginia Beach native, worked on his new book for more than a decade, and it all started in Richmond at a Lou Reed show in 1989.

Today when longtime New Yorkers talk about how their city is a shadow of its former creative and artistic self, you can feel their pain. Everyone has been priced out, they say. Downtown has become a playground for the rich.

You can learn more about how creative, experimental and interconnected things were in the New York of the ’60s and ’70s through Kembrew McLeod’s new book, “The Downtown Pop Underground: New York City and the literary punks, renegade artists, DIY filmmakers, mad playwrights and rock ‘n’ roll glitter queens who revolutionized culture.” (Abrams).

A professor at University of Iowa, McLeod is also a documentary filmmaker, journalist and activist prankster originally from Virginia Beach, where he took high school theater classes with future actor Mark Ruffalo. He would earn his first degrees at James Madison University [where I met him] and the University of Virginia.

The whole idea for the book started in Richmond in 1989, the author says, when as a youngish-looking 18-year-old he talked his way backstage at a Lou Reed, Maureen Tucker and Half-Japanese show — getting his Velvet Underground records signed, interviewing the notoriously cranky Reed (McLeod’s first interview) and scoring great, candid material.

“He still gave me his resting bitch face, and when he was walking away, I asked for my lucky pen back,” McLeod says. “He walked back and stared at me for what felt like 10 minutes. Then I said, ‘I guess times like this, it sucks to be a rock star,’ and he smiled and gave me my pen back and walked away. … I think my earnestness broke down his usual defenses.”

Style Weekly: How did you set about making your book different from the hundreds out there on this period?

Kembrew McLeod: I think one of the things I knew might set this book apart is that I wanted to show how deeply interconnected all these different scenes were, how each one didn’t develop in isolation. They needed this outside creative energy coming from other art forms and mediums. The book is really making a prolonged argument that isn’t necessarily intuitive to many people: I’m arguing that underground theater, which came along 15 years before punk, created the template for what gets credited as punk innovation. Breaking down barriers between audience and performer, doing-it-yourself, going around cultural gatekeepers, reusing public and private spaces to create a scene — all that happened with Off-Off-Broadway theater first.

There are a lot of names and seminal moments — I’m sure that was a challenge to structure or make sense of all this info.

Yeah, it was the biggest challenge. I spent years immersing myself in other books. Then over the past five years I did well over 100 interviews — over a million words of transcription. I thought about it like a movie like “The Godfather,” or a show like “The Sopranos.” Lots of characters and plot threads. So I picked the eight key people who represented border crossings of different scenes and art forms, and who were at the center of social networks that formed around downtown. Through them I could talk about pretty much anyone else — that provided the scaffolding. They took me into John Cage, Yoko Ono, Richard Hell, etc. I wanted to balance people who are very well known with people who have amazing stories but who weren’t household names … Chris Stein [of Blondie] was really helpful, those are mostly his photos on the cover of the book.

Some parts remind me of the early ’90s scene in Harrisonburg and Northern Virginia with Riot Grrrl kicking off and Teen Beat bands Sexual Milkshake and Blast Off Country Style that we experienced — looking back, it all seems very Fluxus-influenced.

Exactly. Yeah, that is a gift Virginia gave me. I saw a lot of ourselves in the lives of these people, although they had a much larger impact partly because of where they were, in this nexus of culture near Midtown [Manhattan]. Walter Cronkite was showing the Velvet Underground on TV in 1965 before their first album even came out.

In your coda you mention newer music group Talibam! — how it tried to levitate the Vice Media building and dump it into the East River.

Yeah [laughs]. I put that in there because of the parallels with the earlier story of the yippies levitating the Pentagon. The Talibam story encapsulates everything that has gone wrong in the past 20 years in New York. They are spiritual stepchildren of the Fugs and that’s a smart and funny moment of cultural criticism, using the Internet to get their story out.

They targeted Vice because it had moved into a building previously used for underground rehearsal space and performance space for local artists. It was a perfect metaphor for what Vice does, which is cannibalize the culture of the underground and repackage it for various media platforms. It’s almost impossible for artists to survive downtown now in one of the highest income ZIP codes in the country.

I wonder, with your history of pranks and friends of yours like the Yes Men, why are activist pranks not happening more in the age of Trump?

That’s a hard question. A lot of us who do pranks are rethinking the efficacy of them. Basically those satires we were doing, most people would realize they were too absurd to be true. Today, we’re living in a time when [reality] seems like a prank. Also, a lot of our pranks were premised on basic ground rules of human rights — you don’t put children in cages, slavery is wrong. At the time there was some consensus about basic human rights that now is being called into question. Maybe that’s why younger people aren’t gravitating toward these tactics: They’re growing up in a completely different world. Doesn’t mean that satire is dead. We’re just rethinking the strategy. Yeah, I need to write about that [laughs].