Jerry Tallmer – Theater Critic, Creator of the Obies has Died at 93 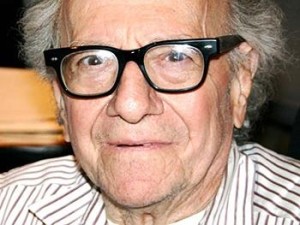 Jerry Tallmer, theater critic and founder of the OBIE awards has died at the age of 93. Crystal Field co-founder of Theater for the New City had this to say:

We are sad to announce the passing of Jerry Tallmer, the great theater critic, who founded the OBIES, the Village Voice Awards for Excellence in Off and Off-Off Broadway Theater. He was a mighty force to be reckoned with in his day. He was a great part of the tremendous change in American play writing that a number of us count ourselves lucky to have been a part of.

Gay playwrights, Black playwrights, Hispanic playwrights, Anarchist playwrights, women playwrights… Let’s see –- What does that leave out? — Ok. — Forward looking Caucasian male playwrights. We came together under his critical eye. He fought for us and through us, and we made American Theater the bright and bubbling and sometimes boiling platform for a collection of new ideas, and new ways in the world.

See you in the newspapers.

Condolences to the Tallmer family. He is a force that will be greatly missed in the theater world.

Jerry Tallmer, Critic Who Created the Obies, Dies at 93