If Happy Little Bluebirds Fly Beyond The Rainbow, So Can The Harris Family! – Andrew Martin 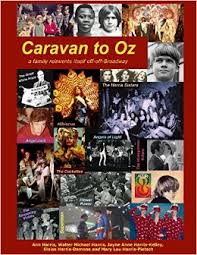 The review below was written by our talented friend performer, writer, radio personality Andrew Martin:

The caravan begins its initial drive down life’s highway in the Westchester, New York enclave of Bronxville, where actor-writers George Edgerly Harris II (hereafter referred to as George Sr) and his wife Ann launched a family of six eventual children, namely and in order George Edgerly Harris III (hereafter referred to as G3), Walter Michael Harris, Frederic Joseph Harris, Jayne Ann Harris (today Harris-Kelley), Eloise Alice Harris (today Harris-Damone) and Mary Lucille Harris, hereafter referred to as Mary Lou. After the family relocated to Belleaire, a suburb of Clearwater in Florida, and spent several years there in which all six of the children proved themselves extremely adept at both performance and self-producing various extravaganzas, the family once again headed north and took up residence on the Lower East Side, slowly assimilating themselves into the world of Off-Off-Broadway which had already begun coming into its own ten or more years earlier with the advent of LaMaMa Experimental Theater Company, the Living Theater, and the Caffe Cino. By the late 1960s, Walter Michael (not merely an actor-singer but a very impressive and self-taught musician) had established himself as the youngest original cast member of the hit musical Hair on Broadway, while George Sr took a role in The Great White Hope and subsequently took the show on the road, and mother Ann assumed a featured part in the classic horror film The Honeymoon Killers, alongside Shirley Stoler and Tony LoBianco. G3, meanwhile, trotted off to San Francisco to find his own path and, aside from being reportedly the first person to stick flowers into the gun barrels of the police during the Summer of Love in Haight-Ashbury while living on a commune, also began exploring drag artistry under the name Hibiscus as a founding member of the pioneering troupe The Cockettes. Upon his self-imposed termination in Hair, Walter Michael also ventured to Northern California to join his big brother but opted for a more spiritual path, ultimately becoming a monk of the Holy Order of MANS (although he did eventually return to the theatrical fold after a fashion). Once reborn as the theater company The Angels of Light, the girls of the family along with their mother settled into a happy existence as literally the First Family of Off-Off-Broadway besides appearances on a triumphant tour of several European countries.

The story also has some disturbing twists and turns. Hibiscus ended up as one of the earliest-known victims to succumb to the AIDS crisis. It’s also notable that brother Fred offers no input to the book whatsoever, leaving a reader wondering exactly what his side to the story might be. The Harris Sisters, however, continued to find fame as a trio within the cabaret club spectrum during the 1980s and 1990s (occasionally making appearances with the renowned downtown actor-singer Bobby Reed), and the entire book is interlaced with lyrics written by mother Ann for such shows as The Sheep and the Cheapskate, There Is Method In Their Madness, and Sky High. It’s almost a little too much to take in upon just one reading, to realize exactly how incredible this superb family of eight managed to accomplish in one lifetime together. But by the last page, one can’t help but feel a sense of peace, as well as the hope that anything in life is truly possible given the right brand of dedication and talent.

Caravan to Oz is available by ordering here. Do yourselves a favor and grab a copy.